A Clique-based control method of multi-robot systems is studied for formation and attitude coordination by using relative measurements in local coordinate frames. The control objective is to achieve a desired formation with all robots facing a target for monitoring. It is assumed that each robot can only measure the relative positions and attitudes of their neighbors and that no communication among agents is available. To address this issue, we propose a distributed clique-based formation and attitude control law that ensures achieving the control objective. 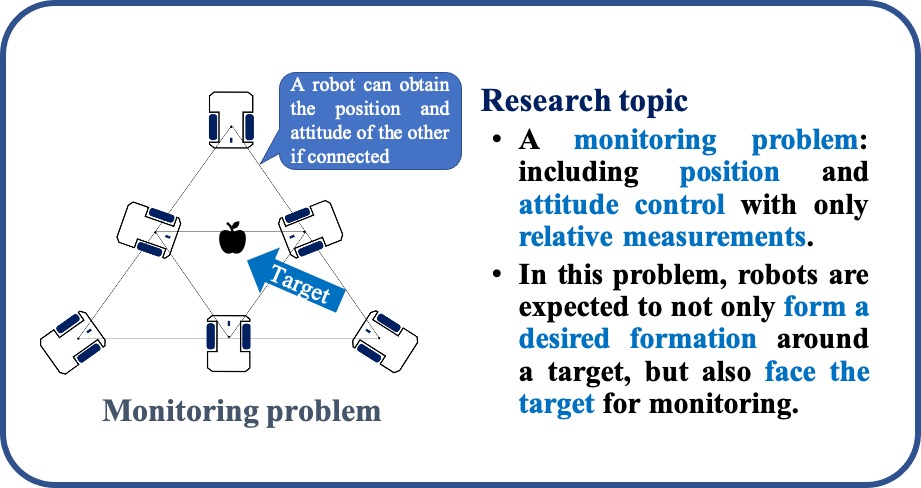 First of all, the result of this study are particularly suitable for rescue after disasters and the transportation of heavy luggage. For disaster-prone areas, by employing the proposed method, multiple robots can be used to perform collaborative rescue after a disaster, such as placing a group of robots in the rubble to rescue survivors. In addition, the results of the study can be used to transport objects in factories or construction sites to reduce labor intensity and work risks for workers.

Moreover, this research can be applied not only to unmanned ground vehicles, but also to unmanned vehicles. Therefore, by applying the proposed method, when an illegal crime occurs in the case that the police cannot reach the crime scene quickly, a group of drones can be deployed to the scene for investigation and surveillance.

Finally, robots are expected to be cheaper because they do not need to be equipped with GPS or communication systems. Therefore, even for living alone or in the daily life of an elderly person, it is possible to carry heavy items such as furniture by using a robot at a low price. It will be of great help to societies facing an aging population and a declining birthrate.